Do You Need to Hire a Ghostwriter? 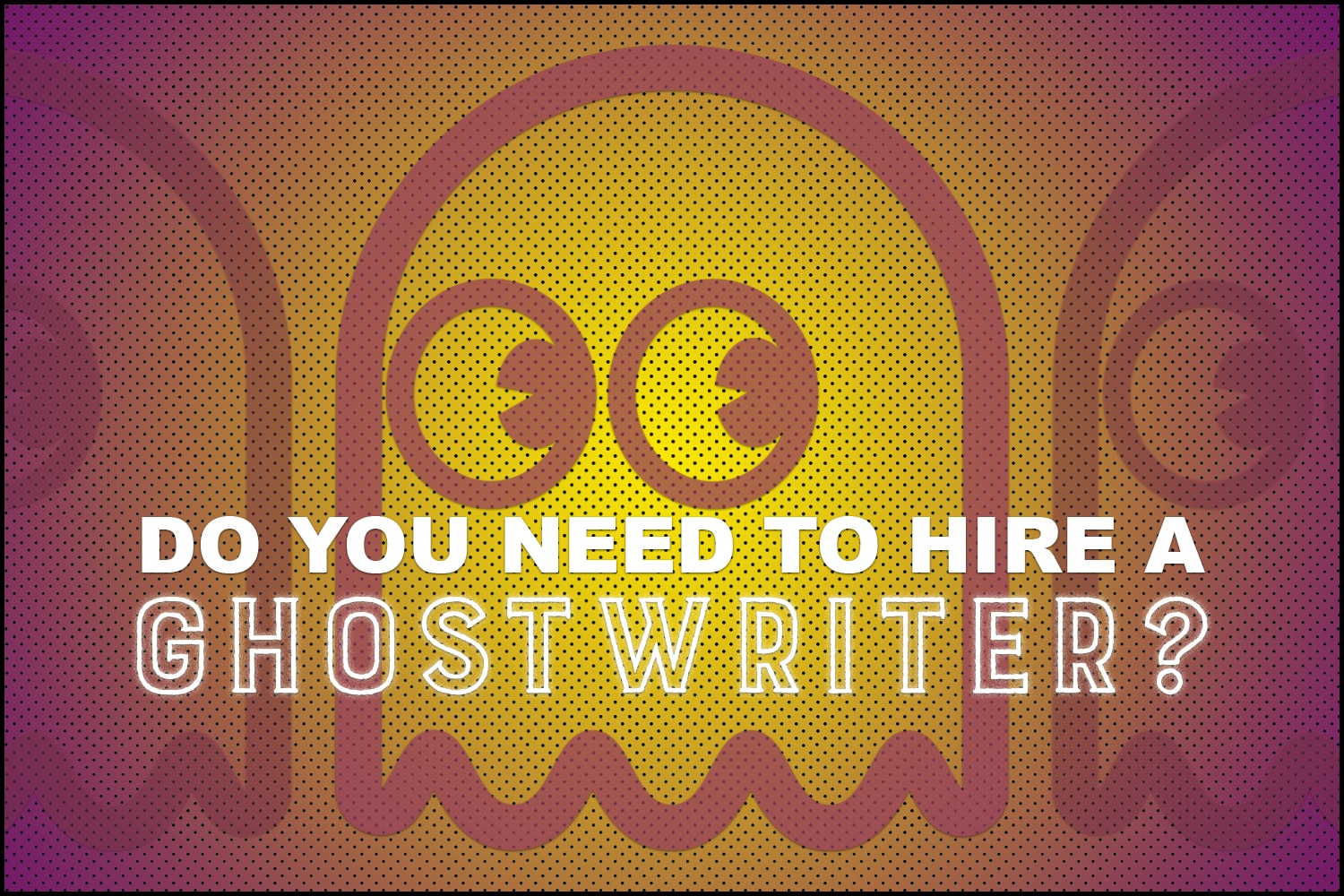 Is it time to hire a ghostwriter?

It’s a question that small business owners often consider while they’re in the process of creating or expanding their marketing strategy, especially while building a content-based lineup around their customer journey. When it comes to pages and pages of written content, having a writer on board might not be a reality.

But, depending on your history with the term, ghostwriting might have a bad reputation. Some business owners have some legitimate, ethical concerns about ghostwriting. Hiring a writer to put words in their mouth doesn’t seem like a good way to build an authentic relationship with their customer.

If hiring a ghostwriter is somewhere in your future, read on!

We’re going to cover exactly what ghostwriting is, how it works, when you should hire a ghostwriter, and where the ethics get fuzzy.

Believe it or not, you might be more familiar with the ghostwriting process than you think.

What a Professional Ghostwriter Does

This is a question I’m asked from time to time. If you take a look at the content creation services I offer, you’ll notice that “ghostwriting” isn’t listed.

That’s because it’s implied. When I write content for your brand, I don’t put my name on it. In fact, most of the time, the article byline (who the piece is credited to) actually goes to someone else within your organization.

In cases where the content can’t or shouldn’t have a byline, ghostwriting is the default setting. It would be weird to have a byline on your website that reads:

You wouldn’t want that, and neither would I.

Ghostwritten content takes all of the fuss around authorship and accreditation and throws it out the window. That’s one of the reasons to hire a ghostwriter in the first place. The ghostwriter passes any claim of authorship to you along with the content.

Aside from those questions around content and ownership, ghostwriters do pretty much the same thing as other types of writers. Some are hyper-specialized within a certain field. Some only work on a specific type of project, like biographical books. Some writers are a little more general in the type of work that we offer.

When & Why to Hire a Ghostwriter

As you probably see at this stage, while “ghostwriting” is typically associated with books and authorship, that’s not always the case.

Ghostwriting is a huge umbrella, and it’s often attached to much of the content that floats around in the business world. There’s even a case to be made that the majority of business content is written by armies of ghostwriters because it’s the only way that businesses can stay competitive.

There are three big reasons to hire a ghostwriter:

Let’s take a look at each one in turn.

Especially for startups, hiring a ghostwriter is a way to bring a new set of skills to your team. In the world of content marketing, finding a ghostwriter who can stylize your brand voice (or mimic the voice you already have) can have a huge impact on your marketing strategies.

Infusing your brand with intangible concepts can be difficult, but pulling it off can lead to dramatic brand growth. Ideas around “purpose” are a great example. Kantar put out a study a while back which indicated that brands recognized as having high purpose grew twice as fast as competitors.

A ghostwriter skilled in marketing and content creation can probably weave that concept into your brand. If you haven’t taken the time to learn that skill, then you’re hiring for something outside your range of expertise.

Typically, a ghostwriter is an outside contractor — a freelancer — and by hiring them, you’re bringing in someone who knows how to generate the type of content that you need but who doesn’t want to take credit for it.

Looking at it from the aspect of a close partnership, an executive in the C-Suite might also bring a ghostwriter on board for a more intimate project, like a book, because he or she wants the publicity that comes with writing a book but might not be able to do it alone.

At the end of the day, writing is a skill. When you hire a ghostwriter, you’re still hiring for that skill — but you’re also looking for someone who doesn’t mind staying out of the spotlight.

I’m grouping these together because it’s easier to treat time and volume as an equation (rather than two separate entities) as a factor of production.

One of the biggest reasons to hire a ghostwriter is the same reason you’d hire an accountant or a janitor. It’s a specialized service that you need to hire out for so that you can focus on other things.

Simply put: You need something done, and you don’t have the availability to do it on your own.

This also goes beyond blogging and content. While content marketing can play a big role in how your customers move through your sales funnel, ghostwriters can also create business documentation, email outreach campaigns, and written work around various copy initiatives.

All those necessary pieces of equipment that you just don’t want to bother with — from client sales letters to new hire welcome emails — are items that a ghostwriter can create to help you smooth out kinks in your business infrastructure.

Ghostwriting is never as simple as 1-2-3, but the process doesn’t have to get overly complicated. When you plan to hire a ghostwriter, one of the key things to look for is a willingness to collaborate — and that has to go both ways.

Here’s why: When you hire a ghostwriter, you’re hiring someone to write on your behalf.

Even if your ghostwriter mimics your voice perfectly, you might not be entirely comfortable with everything they say. It’s important that you have a hand in the creation process, that you’re familiar with what has been written, and that you can speak to it effectively.

Ghostwriting is all about partnership. A good ghostwriter listens and takes thorough notes, but they’ll also push you to develop your ideas a little more. Many will bring their own counterpoints to the table.

Speaking from experience with ghostwriting projects, I’m always trying to figure out what story my client is trying to tell, how I can help them tell it more effectively, and what I can do to help them develop the idea a little more.

If you hire a ghostwriter who isn’t focused on taking your ideas and building on them with you, think twice. You might not like the outcome.

Likewise, remember that a ghostwriter isn’t a psychic. They need to understand your approach to a concept or idea in order to be able to write something that you’re proud to call your own.

In some parts of the world, including the US, ghostwriting has a reputation as an unethical practice. The process can seem inauthentic.

The idea that someone is pretending to be someone else doesn’t land well. Potential clients sometimes have a problem with the fact that a sales letter or a client follow-up — something that resonated with them — wasn’t actually written by the person who signed their name at the bottom of the page.

These are real concerns.

The truth is that there is both an ethical and unethical side of ghostwriting, and it’s something that you can set limits around when you hire your ghostwriter.

Marie Claire has an excellent piece about a ghostwriter who wrote for internet influencers that she’d never met. Hired by a third party to write a book for this influencer, all the writer had to go on was an Instagram account. She made up stories about events that never happened from friends she’d only seen in pictures because she had no access to the influencer who would ultimately have to speak to what was written in the book.

That’s super unethical (and not the writer’s fault).

One of my former clients is a savvy marketer and e-commerce entrepreneur.

When he hired me, I knew both of these fields pretty well.  It’s one of the reasons that he brought me on.

But when I interviewed him for a piece, I let him explain to me in his own words his approach to marketing and e-commerce.

I didn’t have to do that. I could have just written everything based on my knowledge of the topic. But that’s not the point of ghostwriting.

That’s ethical and, when we were done, it sounded like he’d written it himself. That’s exactly what ghostwriting is all about!

You know, 15% of small businesses say that their top challenge is marketing and advertising, but it’s not like the other 85% have it all figured out. Some businesses have marketing departments, but a lot of the clients I work for are small teams without a content expert on their payroll.

No matter where you are in your content creation process, if you find yourself in need of a ghostwriter for anything from blog content or CEO thought leadership all the way to a complete book, don’t hesitate to get in touch.

Your readers will never even know I was there.

Busy? Get writing & marketing tips delivered straight to your inbox.